After more than a decade of formal training focused on classical RAD Ballet, Jazz, Contemporary and Tap styles, Leah began teaching the performing arts as a teenager. Later, she expanded her formal training to include Hip Hop, Drama and Musical Theatre, totalling more than twenty years of professional arts education. Leah has built a strong foundation of skills in her experience as a professional dancer and musical theatre performer in many cities including Vancouver, Toronto and New York City. Leah returned to the Island to start her family and contribute to a strong and vibrant community in her varied roles as a Waldorf Gradeschool Teacher, volunteer, community leader and avid supporter of several non-profit societies including Sunrise Waldorf School, Victoria Operatic Society, Canadian Cancer Society, Cowichan Station Area Association and Four Seasons Youth Musical Theatre Society. Leah has a strong desire to share her passion and purpose with others. She continues to learn and incorporate new skills into her methods, believing in a holistic and developmentally nourishing approach to instruction. Leah began Warmland Dance in 2013 with her husband and community partners and is constantly feeling challenged, inspired and fulfilled.

Warmland Dance will be offering classes through the month of June, led by internationally recognized master-teachers.

These classes are "pay what you can", and are offered FREE to those unable to contribute at this time. Everyone welcome, registration not required. 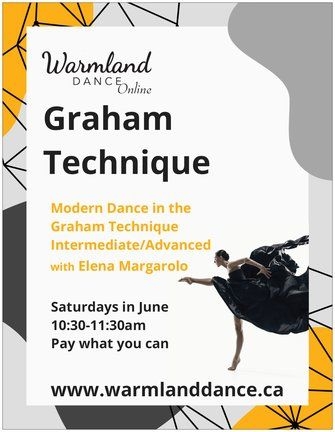 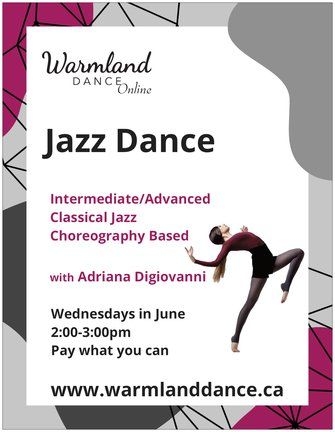 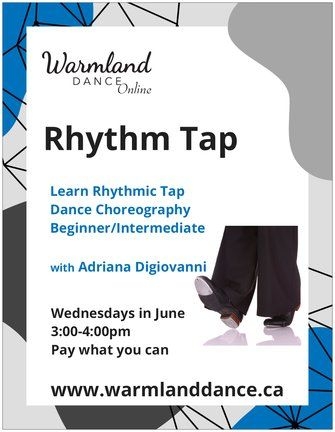 Graduated from the Faculty of Dance - Pontifical Catholic University of Parana - in 1994; Adriana is an internationally recognized teacher and choreographer in classical ballet, jazz and tap dance, owner of the Centro de Artes Adriana Digiovanni [Adriana Digiovanni Arts Center] in Brazil.

Adriana will be offering classes in Classical Jazz and Rhythm Tap Wednesdays in June.

Born in Florence, Italy, she studies at the Ballet Centre. Elena is Advance-1 Member of R.A.D of London. After winning in 1991, a scholarship for the Alvin Ailey American Dance Center, she moves to New York, and in 1994 she dances for the Martha Graham Dance Ensemble. The same year she moves back to Europe to dance in Germany in Gelsenkirchen in the Ballett Schindowsky. Here she starts working as a singer for various Musicals: West Side Story, Evita, The Black Rider. In 2001 she sings and dances in Berlin in the Disney Musical " The Hunchback of Notre Dame" and 2002 in CATS.

Dancer and Singer at AIDA Cruise Ships, choreographer and dance coach at Tui Cruises "Mein Schiff" in Germany. Elena us a Graham technique lecturer at the "Laban Centre" in London, UK, and at the Balance-1 Academy in Berlin, Germany.

Stephanie Ruddell has an extensive background teaching and performing classical dance across North America. She started dancing at the age of 4 with Suzanne Pomerantzeff at the Academy of Ballet Arts in St. Petersburg FL. She then continued her ballet training at Pacific Dance Centre in Victoria BC with Maureen Eastick and spent her summers dancing at the Banff Centre for the Arts. Stephanie holds a certificate in Dance Teaching, her ECEA, and is a certified Nurturing Pathways® creative dance teacher. She is also working towards her registered teaching status with the Royal Academy of Dance. Stephanie is very passionate about sharing the joy of dance and encouraging movement with children and their families. In every class she teaches, she strives to nurture creativity, movement, bonding, and growth for every child. Stephanie is delighted to be a part of the Warmland Dance community.

Lynn has been dancing all her life and loves sharing her passion for dance. She is an educator, performer, director, and advocate of human potential.

Her training includes Decidedly Jazz Danceworks, University of Calgary, and studying with master dancers of Les Ballet Africains, Percussion de Guinea, and Ballet Saamato. She has studied extensively across a range of disciplines, specializing in Cultural Dance, specifically West African Dance and Drumming. Her recent choreography and performance work includes Tribe of One, Coco Jafro, and the Art House Collective. Lynn owns and operates MoonDance Dynamic Arts School, and is Chair of Matoto Multicultural Arts Society. She reaches broad audiences to share the Arts and cross-cultural understanding. She collaborates regularly with Power of Hope, Canada World Youth, Cowichan Intercultural Society, and other leadership groups on Vancouver Island and abroad.

Lynn Weaver is a member of the Canadian Dance Assembly.

Marisa Jackson is a classically trained dancer from a young age having toured, choreographed and taught in Europe for more than 10 yrs before moving to Canada. Marisa spent 8 years living and working in intentional communities in Ontario and BC. She is passionate about authentic movement, deeply inspired by the work of Claude Coldy (Sensitive Dance), enjoys capoeira and is finally exploring Argentinean tango! Marisa is looking forward to the coming years developing the Warmland Dance's professional performance company, and teaching the art of improvisational dance to dancers of all abilities.

Satya began her formal training at Warmland Dance in 2013. A lifelong mover, Satya applies a combination of natural grace, physical strength, musicality, consistent hard work, positive attitude and passion for dance to her endeavor toward mastery. Satya has become an incredibly skillful dancer, leader and beloved role model at our studio. She has become an award winning soloist and performer with Warmland Dance and is continually successful in her ongoing pursuits in the Cowichan Valley Arts community. It is with excitement and pride that we welcome Satya as an esteemed member of our faculty this year.

Elliot Fox-Povey lives in the Cowichan Valley with his children and partner. He has directed & produced over a dozen youth productions. He is a BC professionally certified teacher withover a decade of experience teaching in schools, performing arts venues and other settings. Elliot holds Bachelor degrees from Simon Fraser University and is a graduate from the Acting program at Douglas College. Elliot loves working with young people on stage where, he believes, though we may call it acting, the real subject of study is always empathy, self understanding, and finding confidence. He is a skilled, dynamic, and warm artist and teacher, and is especially excited to be working with Warmland Dance.

Hilary, a local to the Cowichan Valley, started dance training at an early age. With intense training in tap, ballet, jazz and modern she found her passion of expression through dance. Her more recent trainings have been with the Brazilian Martial Art – Capoeira. She teaches Capoeira classes for children as well as adults. She also loves to perform and often takes to the stage with dance partners Leah Burley and Marisa Jackson..

Jasper is a Musician, a Dancer, a Yogi, a Breath Worker, a Facilitator, and a Father. His many various creative passions and healing practices have lead him on a path of weaving together different pieces of movement, feeling, and thought into a unique tapestry of expression and exploration. He is also very passionate about community and playfulness, and much of his love of Contact Improvisation as a dance form is because of it's inherent focus on relationship, embodiment, authenticity, play, and creativity. Jasper teaches with an emphasis on the somatic experience of being present in the body, the awareness and communication of boundaries, and the continual exploration of the what is possible. He teaches through guided movement, games, simple technique practices, investigation, inquiry, and curiosity.​